For years, State Department and Pentagon officials wanted him out. He opposed Bush’s 2003 Iraq war and other US policies. He had to go.

In February 2011, Mubarak was ousted. At the time, an article said hold the celebration. Egypt’s struggle just began. Everything changed, stayed the same, and worsened.

Francis A. Boyle: The United States Promotes Israeli Genocide Against the Palestinians

In direct reaction to Israel provoking the Al Aqsa Intifada, on October 19, 2000, the then United Nations Human Rights Commission (now Council) condemned Israel for inflicting “war crimes” and “crimes against humanity” upon the Palestinian people, some of whom are Christians, but most of whom are Muslims.[i]

This Special Session of the U.N. Commission on Human Rights adopted the Resolution set forth in U.N. Document E/CN.4/S-5/L.2/Rev. 1, “Condemning the provocative visit to Al-Haram Al-Shariff on 28 September 2000 by Ariel Sharon, the Likud party leader, which triggered the tragic events that followed in occupied East Jerusalem and the other occupied Palestinian territories, resulting in a high number of deaths and injuries among Palestinian civilians.” The U.N. Human Rights Commission said it was “[g]ravely concerned” about several different types of atrocities inflicted by Israel upon the Palestinian people, which it denominated “war crimes, flagrant violations of international humanitarian law and crimes against humanity.”

In operative paragraph 1 of its 19 October 2000 Resolution, the U.N. Human Rights Commission then:


“Strongly condemns the disproportionate and indiscriminate use of force in violation of international humanitarian law by the Israeli occupying Power against innocent and unarmed Palestinian civilians…including many children, in the occupied territories, which constitutes a war crime and a crime against humanity;…”

And in paragraph 5 of its 19 October 2000 Resolution, the U.N. Human Rights Commission:


“Also affirms that the deliberate and systematic killing of civilians and children by the Israeli occupying authorities constitutes a flagrant and grave violation of the right to life and also constitutes a crime against humanity;…”

Article 68 of the United Nations Charter had expressly required the U.N.’s Economic and Social Council to “set up” this U.N. Commission (now Council) “for the promotion of human rights.” This was its U.N.-Charter-mandated job.

Continues >>
Posted by Nasir Khan at 8:42 pm No comments: It was not alone Baghdad, of course, Iraq was being systematically destroyed, from ancient southern Basra to haunting, historic Mosul in the north – in the West destruction was such that it was not even noticed by the outside world that about seventy miles of Iraq had been entirely illegally donated to Jordan, the border was simply “moved.” Kuwait, bordering of Iraq’s southern border benefited similarly illegally.

Then Secretary of State James Baker’s vow to: “reduce Iraq to a pre-industrial age” was being minutely executed over what was to become a forty three day blitz, which morphed in to a thirteen year, vicious, murderous, one sided war of attrition and ultimately illegal invasion and occupation.

Editor’s remarks: What Obama has done or is doing is in line with the American political culture whose basis lies in power and domination. But any lip service by the U.S. power elites to the so-called ‘American values’ and ‘promoting democracy’ abroad (!) is part of that political culture where rhetoric and propaganda have to be used repeatedly before the global audience. In the eyes of American warmongers and the corporate interests that rule America and the global American Empire, this in-itself provides them with a moral basis for their actions and their policies. In a nutshell, the killing of people abroad ranging from individual cases of assassinations to organised slaughter of hundreds, thousands and even millions of people by America in Vietnam and Iraq can all be justified by pointing to a higher cause which USA stands for. During the Cold War, it was ‘defending the free world’ and after the end of the Cold War, it has become ‘war against terror’. Therefore, Obama and his allies are continuing their global peace mission!

Obama made no mention of King during the Inauguration four years ago — but since then, in word and deed, the president has done much to distinguish himself from the man who said “I have a dream.”

After his speech at the March on Washington for Jobs and Freedom in August 1963, King went on to take great risks as a passionate advocate for peace.
After his Inaugural speech in January 2009, Obama has pursued policies that epitomize King’s grim warning in 1967: “When scientific power outruns moral power, we end up with guided missiles and misguided men.”

Consortium News, January 11, 2013
Exclusive: “The Untold History of the United States” shakes up the traditional recounting of the last century, forcing Americans to rethink key assumptions, but director Oliver Stone and historian Peter Kuznick have not written a people’s history, says Jim DiEugenio in part two of his review.

It’s challenging to review a book like The Untold History of the United States by Oliver Stone and Peter Kuznick, with its broad sweep covering more than a century – from the late 19th to the early 21st centuries – especially given the authors’ ambition to reorder how Americans see their nation as it evolved into a global empire and force them to confront how that empire has trampled on the lives and dreams of other people.
Without doubt, there is much value in their effort, which you can also watch in a Showtime documentary series by the same name. It is always good when a serious work comes out that shakes the pillars of the historical establishment by challenging cherished conventional wisdoms. Director Stone and historian Kuznick surely do that. 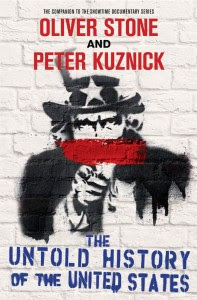 But the inevitable selection process – emphasizing one historical turning point over another and indeed omitting some pivotal moments altogether – invites criticism. And that is true about the second half of this book and series as it was the first half, which I reviewed earlier.

The second half of the 750-page book covers U.S. history from the presidencies of Lyndon Johnson to Barack Obama. And much like the first half, this 50-year sweep of history is more a reshuffling of the official top-down history than a people’s history in the vein of Howard Zinn, who focused more on the popular struggles that invigorated American democracy from the bottom up, rather than on the machinations of the political and economic elites.

Continues >>
Posted by Nasir Khan at 6:52 pm No comments:

Ross Gittins: The four business gangs that run the US

IF YOU’VE ever suspected politics is increasingly being run in the interests of big business, I have news: Jeffrey Sachs, a highly respected economist from Columbia University, agrees with you – at least in respect of the United States.

In his book, The Price of Civilisation, he says the US economy is caught in a feedback loop. ”Corporate wealth translates into political power through campaign financing, corporate lobbying and the revolving door of jobs between government and industry; and political power translates into further wealth through tax cuts, deregulation and sweetheart contracts between government and industry. Wealth begets power, and power begets wealth,” he says.

Sachs says four key sectors of US business exemplify this feedback loop and the takeover of political power in America by the ”corporatocracy”.

Posted by Nasir Khan at 7:29 pm No comments:

Many supporters of Barack Obama are disappointed that he has not reversed the war policies of his predecessor. He did his best to continue the U.S. occupation of Iraq. The Afghanistan war rages far beyond what was seen under George W. Bush. Obama has also proved militaristic in operations in Libya, Yemen, and Pakistan, and in the sanctions against Iran. The attacks on civil liberties and human rights continue on the same path that Bush forged.

Obama gave indications early on that that would be his trajectory. He always promised to expand the Afghanistan war. He never vowed to cut and run from Iraq any faster than was established policy by the time Bush signed the Status of Forces Agreement in late 2008. As a U.S. senator, he voted to legalize Bush’s warrantless wiretapping program, foreshadowing his future sellouts as president on the civil-liberties front.

Yet the reason for the continuity of militarism transcends anything that can be found in Obama himself. The sad truth is that Bush’s two terms were never quite the aberration that they were widely characterized as being. His neoconservative advisors were particularly belligerent in some avenues of foreign-policy theory, but they never represented a hard break from American traditions going back several generations.

Continues >>
Posted by Nasir Khan at 9:24 pm No comments:

Waiting for the judgment that ultimately condemned him to death, the youth icon had a few interesting questions for the believers

Pravin Mishra, Ahmedabad Mirror, April 18, 2012
Twenty-three is too young an age to die and that to for a larger cause! When Bhagat Singh’s father petitioned the British government to pardon his son, Bhagat Singh said that his death will do more to smash the British empire than his release and told his father to withdraw the petition.

Baba Randhir Singh, a freedom fighter, was in Lahore Central Jail in 1930-31. He was a God-fearing religious man. It pained him to learn that Bhagat Singh was a non-believer. He somehow managed to see Bhagat Singh in the condemned cell and tried to convince him about the existence of God, but failed. Baba lost his temper and said tauntingly: “You are giddy with fame and have developed an ego which is standing like a black curtain between you and the God.” It was in reply to that remark that Bhagat Singh wrote an article ‘Why I am an atheist?’. It is a fascinating piece about his coming to terms with his own mortality.

While awaiting his judgment, knowing that he’d be put to death, Bhagat Singh wrote, “Judgment is already too well known. Within a week it is to be pronounced. What is the consolation with the exception of the idea that I am going to sacrifice my life for a cause? A God-believing Hindu might be expecting to be reborn as a king, a Muslim or a Christian might dream of the luxuries to be enjoyed in paradise and the reward he is to get for his suffering and sacrifices. But, what am I to expect? I know the moment the rope is fitted round my neck and rafters removed from under my feet, that will be the final moment – that will be the last moment. I, or to be more precise, my soul as interpreted in the metaphysical terminology, shall all be finished there. Nothing further. I know in the present circumstances my faith in God would have made my life easier, my burden lighter, and my disbelief in Him has turned all the circumstances too dry, and the situation may assume too harsh a shape. A little bit of mysticism can make it poetical. But I do not want the help of any intoxication to meet my fate. I am a realist.”

Continues >>
Posted by Nasir Khan at 1:01 pm No comments: