Nasir Khan: Israel Pushing US to War with Iran

Nasir Khan: Israel Pushing US to War with Iran 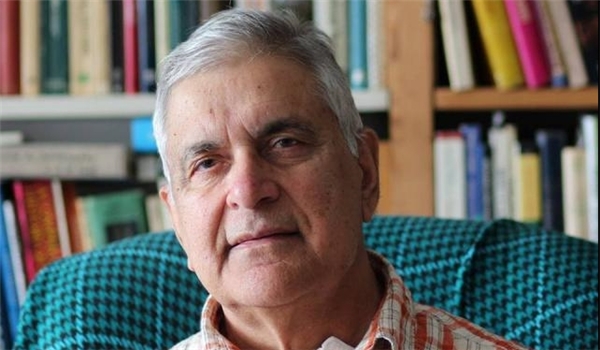 TEHRAN (FNA)- Nasir Khan, historian and peace activist, says Donald Trump, the US President, issued the assassination order of Lieutenant General Soleimani under the influence of Netanyahu’s allies working in his Administration.
In an exclusive interview with FNA, Nasir Khan said, “[Netanyahu] had people like Secretary of State Pompeo and former National Security Advisor Bolton doing their work for him.”

“Netanyahu has used all the ploys. He has played a key role in pushing Trump to unilaterally retreat from the international nuclear agreement with Iran, and has done all to influence Trump to attack Iran”, he added.

Below is the full text of the interview:

Q: How do you see Lieutenant General Soleimani's role in the fight against Daesh, also known as ISIL or ISIS?

A: The emergence of Daesh was primarily due to the general instability caused by the US war of aggression on Iraq in 2003. The systemic destruction of Iraq, its army and infrastructure had created a complicated and confusing situation in and around Iraq. As a result, Daesh was able to expand in Iraq and Syria, where a disastrous civil war had started. The Syrian forces had lost large areas to Daesh.

General Soleimani as a bold military strategist played a pivotal role in defeating Daesh in Iraq and Syria. For instance, his role in breaking the siege of Amirli in 2014, liberating Jurf Al-Sakhr and planning the operation to take Tikrit in Iraq in 2015 from Daesh are memorable. In 2013, he coordinated the military plans with the militias and Hezbollah fighters and captured Qusayr, a town on the Syria-Lebanon border. In 2015, Russian military intervention on the side of President Assad was decisive, but it was Soleimani who had masterminded the ground support to fight against the Syrian rebels.

Q: Why do you think the US targeted Lieutenant General Soleimani, who played a major, active role in defeating Daesh?

A: First, after the defeat of Daesh the US saw Soleimani as an able military strategist of Iran, who had the potential to become a serious obstacle to the US imperial designs on Iran. Therefore, according to US imperial outlook, Soleimani’s death will make the US goals in the region easier. Secondly, both Israel and the US had coordinated their plans to assassinate him. He was perceived as a threat to the interests of the two close allies in the region.

Trump was impeached and Israeli PM Netanyahu was indicted last year. Trump and Netanyahu aim to win elections this year. The two will present the killing of Soleimani as a trophy to the electorate of America and Israel. Netanyahu knows how easy it is for him to influence American political establishment, the US Congress and American voters. Thus Trump has a big supporting ally in Netanyahu to win the election again. To our dismay, major international hegemons help each other in such devious ways.

Q: During his presidential campaigns, Trump claimed he would prevent further wars. What has pushed him in the last three years to the brink of a new war?

A: Netanyahu has used all the ploys. He has played a key role in pushing Trump to unilaterally retreat from the international nuclear agreement with Iran, and has done all to influence Trump to attack Iran. In this, he had people like Secretary of State Pompeo and former National Security Advisor Bolton doing their work for him.

To our surprise, Trump resisted any such military solution last year. He stopped only just ‘ten minutes to go’ before his order to attack Iran was carried out. He sacked war hawk Bolton. But all that political scenario has now changed with the assassination of General Soleimani. Trump has prepared the groundwork for a war on Iran that can lead to catastrophic consequences for the region and the world. The only person who benefits from such a conflict will be Netanyahu who is fighting for his political survival. The lives of people have no meaning for him if he can have his way.