The Zionist organization UN Watch has cited a commentary by Professor Richard Falk on the Boston bombings in a letter to U.N. Secretary-General Ban Ki-Moon demanding that that Prof. Falk be reprimanded for it. Prof. Falk, who serves as the United Nations Special Rapporteur on the situation of human rights in the Palestinian territories occupied since 1967, originally posted the commentary on his blog and I republished it, as I often do his writings, with his kind permission, in Foreign Policy Journal, which version UN Watch links to in its letter. As one should expect, the letter from UN Watch is characterized by its dishonesty and vain attacks on Prof. Falk’s character that deflect attention away from and fail to address the substance of what he wrote.

The UN Watch letter begins with the lie that Prof. Falk in his article “justifies the Boston terrorist attacks”. The UN Watch letter also falsely claims that Prof. Falk blamed the Boston terrorist attacks on Israel and characterized the attacks as “due ‘retribution’ for American sins”. Where Mr. Falk discusses Israel in the article, it is in the larger context of blowback for U.S. foreign policies, including the 9/11 attacks, which, as the 9/11 Commission noted in its report, were motivated in no small part by U.S. support for Israel’s oppression of the Palestinians. Nowhere in his commentary does Mr. Falk blame Israel for or otherwise connect Israel to the bombings in Boston. As for the word “retribution”, where it appears in Mr. Falk’s article, it is in the context of a quote from someone else. . .

Richard Falk: A Commentary on the Marathon Murders

The dominant reactions to the horrific bombings on April 15th, the day of the running of the Boston Marathon, as well as the celebration of Patriots Day, have been so far: compassion for the victims, a maximal resolve to track down the perpetrators, a pundit’s notebook that generally agrees that Americans have been protected against terrorist violence since 9/11 and that the best way to prevail against such sinister adversaries is to restore normalcy as quickly as possible. In this spirit, it is best to avoid dwelling on the gory details by darkly glamorizing the scene of mayhem with flowers and homage. It is better to move forward with calm resolve and a re-commitment to the revolutionary ideals that midwifed the birth of the American nation. Such responses are generally benevolent, especially when compared to the holy war fevers espoused by national leaders, the media, and a vengeful public after the 9/11 attacks that also embraced Islamophobic falsehoods. Maybe America has become more poised in relation to such extremist incidents, but maybe not. It is soon to tell, and the somewhat hysterical Boston dragnet for the remaining at large and alive suspect does suggest that the wounds of 9/11 are far from healed.

Continues >>
Posted by Nasir Khan at 5:19 pm No comments:

PAKISTAN: Why is General Kiyani dictating Islamic ideology as the basis of the country?

Editor’s note: Islam is a religion, not a political ideology. As a religion in this age, it should be a private matter for any believing Muslim, not a political package or venal commodity for rich shoppers or crafty manipulation by the power elites and clerics. Mr Jinnah did not strive for a theocratic state in Pakistan; his aim was to have a democratic state where all people were free to practise their religions (Pakistan has many religions). That meant no state religion in Pakistan. Maudoodi and Zia’s pontifications have little to do with that objective – the objective of a democratic egalitarian state.


Nasir Khan, Editor
————————————————
The General should be prosecuted for betraying his oath as a member of the Armed Forces

Just twenty days before the general elections the Chief of Army Staff (COAS), General Ashfaq Pervez Kiyani, has come out with a policy statement which gives the political views of the Army. The statement was delivered with the express intention of getting elections results in favour of the fundamentalists, Jihadis and their supporting parties. While addressing the assembled troops at the passing out parade of 127th PMA Long Course, 46th Integrated Course and the first Mujahid Course at the Pakistan Military Academy in Kakul, he said that since Islam was the basis of Pakistan’s creation, it can never be separated from the body politic. He categorically emphasised this point when he said, “Let me remind you that Pakistan was created in the name of Islam and Islam can never be taken out of Pakistan. However, Islam should always remain a unifying force. I assure you that regardless of the odds, the Pakistan Army will keep on doing its best towards our common dream for a truly Islamic Republic of Pakistan”.

Continues >>
Posted by Nasir Khan at 7:25 pm No comments:


In a regal interview he gave the Israeli press on the eve of the state’s ” Independence Day,” Shimon Peres, the current president of Israel, said the following:
“I remember how it all began. The whole state of Israel is a millimeter of the whole Middle East. A statistical error, barren and disappointing land, swamps in the north, desert in the south, two lakes, one dead and an overrated river. No natural resource apart from malaria. There was nothing here. And we now have the best agriculture in the world? This is a miracle: a land built by people” (Maariv, 14 April 2013).

This fabricated narrative, voiced by Israel’s number one citizen and spokesman, highlights how much the historical narrative is part of the present reality. This presidential impunity sums up the reality on the eve of the 65th commemoration of the Nakba, the ethnic cleansing of historic Palestine. The disturbing fact of life, 65 years on, is not that the figurative head of the so-called Jewish state, and for that matter almost everyone in the newly-elected government and parliament, subscribe to such views. The worrying and challenging reality is the global immunity given to such impunity.

WASHINGTON — Even as its civilian leaders publicly decried U.S. drone attacks as breaches of sovereignty and international law, Pakistan’s premier intelligence agency secretly worked for years with the CIA on strikes that killed Pakistani insurgent leaders and scores of suspected lower-level fighters, according to classified U.S. intelligence reports.

Dozens of civilians also reportedly died in the strikes in the semi-autonomous tribal region of Pakistan bordering Afghanistan that is a stronghold of al Qaida, Afghan militants, other foreign jihadists and a tangle of violent Pakistani Islamist groups.

Posted by Nasir Khan at 6:20 pm No comments:

Death squads, torture, secret prisons in Iraq, and General David Petraeus are among the featured atrocities in a recently-released new British documentary — ” James Steele: America’s Mystery Man in Iraq”  – the result of a 15-month investigation by Guardian Films and BBC Arabic, exploring war crimes long denied by the Pentagon but confirmed by thousands of military field reports made public by Wikileaks.

The hour-long film explores the arc of American counterinsurgency brutality from Viet-Nam to Iraq, with stops along the way in El Salvador and Nicaragua.  James Steele is now a retired U.S. colonel who first served in Viet-Nam as a company commander in 1968-69.  He later made his reputation as a military advisor in El Salvador, where he guided ruthless Salvadoran death squads in the 1980s.

When his country called again in 2003, he came out of retirement to train Iraqi police commandos in the bloodiest techniques of counterinsurgency that evolved into that country’s Shia-Sunni civil war that at its peak killed 3,000 people a month.     Steele now lives in a gated golf community in Brian, Texas, and did not respond to requests for an interview for the documentary bearing his name.

Continues >>
Posted by Nasir Khan at 6:52 pm No comments:


Much ink (or bandwidth) has been expended writing about the tenth anniversary of the U.S. government’s invasion of Iraq. That is justified, for the Iraq war was an act of naked aggression and a crime against humanity.

While apologists for the Bush administration have cited “bad intelligence” or even incompetence as an excuse for what the late Major General William Odom called “the greatest strategic disaster in American history,” such claims cannot withstand scrutiny.The evidence is overwhelming that George W. Bush and his henchmen cooked intelligence in building their case for the invasion and knowingly lied the country into an unnecessary war. The enormity of this crime is compounded by the fact that the war plunged Iraq, a nation already ravaged by a 12-year-long economic embargo, into a bloodbath that cost the lives of at least a hundred thousand civilians and displaced millions more.

Now, some claim that it is not fair to hold the Bush administration responsible for all the horrors that unfolded in the aftermath of the U.S. invasion. But that really is no defense. As the Nuremburg tribunal declared, “To initiate a war of aggression ...  is not only an international crime; it is the supreme international crime, differing only from other war crimes in that it contains within itself the accumulated evil of the whole.”

And by any reasonable standard, the invasion the U.S. government launched against Iraq on March 19, 2003, constituted a war of aggression. Iraq had never attacked the United States, nor did she pose a conceivable threat to the nation. 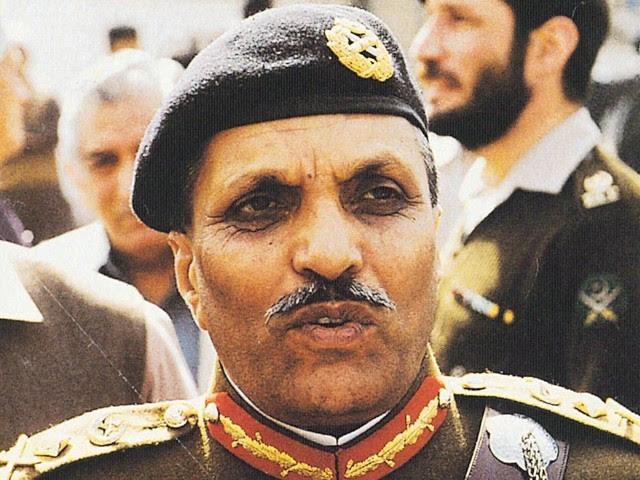 
The ghost of General Ziaul Haq and his drive to turn Pakistan into a theocracy continues to haunt us. Under immense pressure from the courts and clerics, the Election Commission of Pakistan (ECP) is seemingly undertaking a purge of politicians who may not be ‘righteous’ under Articles 62 and 63 of the Constitution.

These articles emanated from the desire to create an Islamic legislature where only the “sagacious”, “righteous and non-profligate, honest and ameen” could hold public offices.

How can we define these vague terms, which are open to interpretation and abuse?

Articles 62 and 63 also suggest disqualification if a candidate is deemed to be against the ‘ideology of Pakistan’. Sadly, that very term was coined under the influence of Jamaat e Islami and General Yahya Khan’s comrade Gen Sher Ali contributed to its adoption for cynical reasons. History is a witness to Gen Yahya’s own conduct and the utter disdain he had for his Bengali subjects. The genesis of this term therefore is self-serving and purely hypocritical. Soon, the same junta trumpeting the ideology of Pakistan led an army action against Pakistanis and the events of 1971 remain a blot on our collective conscience.

Posted by Nasir Khan at 3:18 pm No comments:

Report: The Staggering Cost of Israel to Americans


Israel has a population of approximately 7.8 million, or a million fewer than the state of New Jersey. It is among the world’s most affluent nations, with a per capita income similar to that of the European Union.[1] Israel’s unemployment rate of 5.6% is much better than America’s 9.1%,[2] and Israel’s net trade, earnings, and payments is ranked 48th in the world while the US sits at a dismal 198th.[3]

Yet Israel receives approximately 10% of America’s foreign aid budget every year.[4] The US has, in fact, given more aid to Israel than it has to all the countries of sub-Saharan Africa, Latin America, and the Caribbean combined—which have a total population of over a billion people.[5] And foreign aid is just one component of the staggering cost of our alliance with Israel.

Given the tremendous costs, it is critical to examine why we lavish so much aid on Israel, and whether it is worth Americans’ hard-earned tax dollars. But first, let’s take a look at what our alliance with Israel truly costs.

Continues >>
Posted by Nasir Khan at 9:10 pm No comments: