Editor’s note: The imperialist ruling class puts its plentiful resources into making humanity forget the enormous contribution of the Soviet Union toward defeating Nazi-led German imperialism in World War II. The people of Leningrad made historic sacrifices in that effort that should be commemorated by all supporters of socialism.

Jan. 27 — Seventy years ago today, the Soviet Union’s Red Army broke through the ring of German imperialist troops that had surrounded  Leningrad — now called St. Petersburg — for 900 days. During the siege, 1 million people trapped in the city died from disease, starvation and enemy action. The city’s liberation came less than a year after Soviet troops stopped Nazi-led Germany’s advance in Stalingrad and forced the retreat that would end with their surrender in Berlin.

Some Remarks On Belief In God

[The following remarks are part of the discussion that started on Facebook with a quotation of English philosopher, Bertrand Russell.]

First of all, there are many people who believe god, devil, angels, etc., are not mere fantastic ideas but they really exist. One proof: they are mentioned in some holy books. And in some holy books god is reported to have spoken to his selected few. The holy books that are revealed are from god; therefore they represent the obvious truth which no one can or should find fault with. In fact, the believers in god have internalised such a mode of thinking that any critical look at it is regarded as wrong and a result of mental confusion. At the same time, the term ‘god’ means different things to different people. But the idea of god entails some sort of belief in a ‘supernatural being’ or ‘power’. In monotheistic religions, starting with Judaism, many deities were finally reduced to only one god (this is despite Akhenaton’s early attempt to introduce Aton as the sole god but the project collapsed after his death). 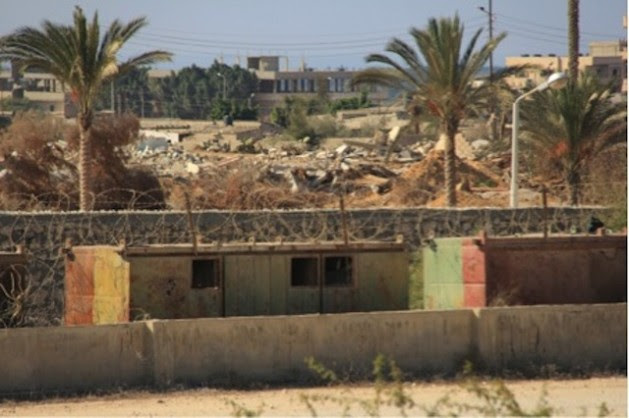 Underground trade tunnels destroyed on the Egyptian side of the border with Gaza. Credit: Khaled Alashqar/IPS.

GAZA CITY , Jan 10 2014 (IPS) - The border between Egypt and the Gaza Strip used to buzz with activity until a few months back as traders brought in an array of Egyptian goods – from food supplies to raw material – through hundreds of tunnels.

But these underground structures, located 40 km from here, between Rafah in Gaza and Sinai in Egypt, have fallen silent.

Things came to a grinding halt after the Egyptian army came to power in Cairo. Calling them a security threat, it launched a systematic military campaign against the tunnels, destroying them, along with the houses under which they were built on its side of the border.

Nabil said more than 90 percent of the passages, most of which are privately operated, have been destroyed by the Egyptian military, completely paralysing trade through the tunnels.

Continues >>
Posted by Nasir Khan at 6:26 pm No comments:

Mr Salaman  Taseer opposed the infamous blasphemy laws and stood for the rights of the underprivileged, socially downgraded and politically powerless Christians in a predominantly Muslim country, who have been frequently targeted by anti-social Muslim religious extremists. For his bold political stand and public views, his life was in danger; he was apprehensive of an attempt on his life at the hands of any misguided extremist. As we know, a vicious and brainwashed extremist goon killed him. His death reminds us of the deplorable fanaticism, intolerance and apathy in Pakistan.

But the best way we can pay our respects to this noble son of Pakistan is that all democratic, revolutionary and politically active people unite on some common points and struggle against miscreants and religious extremists who personify evil and inhumanity. They are not only a constant threat to the level-headed and just people who dare to speak against the injustices inflicted upon the people under the blasphemy laws but also a insult to the glorious and tolerant religion, Islam.

The so-called blasphemy laws of the brutal dictator General Zia strengthened the hands of religious maniacs in Pakistan. We demand that all these barbaric laws be annulled and all people of Pakistan irrespective of religion, creed, or ethnicity be treated equal in law and in society. This should happen not by pious wishes but in practice. At present religious persecution, oppression and religious discrimination in Pakistan is growing. This destructive and insidious phenomenon violates basic human rights of the citizens of Pakistan and also violates the the UN Charter.

Posted by Nasir Khan at 8:23 pm No comments:

The slow disintegration of living conditions in the West Bank continues apace. But this is no natural disaster or complicated economic malaise. This is a very deliberately created policy, one designed and implemented by a state – the occupying power Israel.
The Zionist project in the land of Palestine shares much with the toppled South African apartheid regime. But there are important differences. Unlike South Africa, which relied on the black masses as a subservient labour force, ideologically, Israel would simply wish for Palestinians to disappear.

Hence the project of Zionist colonisation that began even before 1948, but reached a peak then, with the Nakba – the deliberate ethnic cleansing of the majority of the Palestinian population through force of arms. This project never ended and continues today.

Palestinians on both sides of the “Green Line” ceasefire line (drawn in 1949) constantly face down direct expulsions from the Israeli terrorist army. A new project of Israeli ethnic cleansing the in southern desert, the Naqab, has been thwarted by a concerted Palestinian protest movement. Or thwarted for now, we should say, since the Prawer Plan is likely to return to the Knesset in another form.

Continues >>
Posted by Nasir Khan at 9:20 pm No comments:

2014: International Year of Solidarity with the Palestinian People

In a little noted initiative the General Assembly on November 26, 2013 voted to proclaim 2014 the International Year of Solidarity with the Palestinian People. The UN Committee on the Exercise of the Inalienable Rights of the Palestinian People was requested to organize relevant activities in cooperation with governments, the UN system, intergovernmental organizations, and significantly, civil society. The vote was 110-7, with 56 abstentions, which is more or less reflective of the sentiments now present in international society.  Among the seven opponents of the initiative, in addition to Israel, were unsurprisingly its three staunchest supporters, each once a British colony: the United States, Canada, Australia, with the addition of such international heavyweight states as Micronesia, Palau, and the Marshall Islands. Europe and assorted states around the world were among the 56 abstentions, with virtually the entire non-West solidly behind the idea of highlighting solidarity with the Palestinian people in their struggle for peace with justice based on rights under international law.

Three initial observations: those governments that are willing to stand unabashedly with Israel in opposition to the tide of world public opinion are increasingly isolated, and these governments are under mounting public pressure from their own civil societies that seeks a balanced approach that is rights based rather than power dominated; the West, in general, is dominated by the abstaining governments that seek the lowest possible profile of being seen as neither for or against, and in those countries where civil society should now be capable of mobilizing more support for the Palestinian struggle; and the non-West that is, as has long been the case, rhetorically in solidarity with the Palestinian people, but have yet to match their words with deeds, and seem ready to be pushed.

Continues >>
Posted by Nasir Khan at 6:54 pm No comments:

The past year witnessed bloodshed in Syria and Iraq, turmoil in Egypt, anarchy in Central Africa, threats by a nuclear-armed North Korea and Chinese military posturing, but as 2013 ends a global poll finds that the country seen as representing the greatest threat to peace today is … the United States.


Not only did the U.S. top the list with an aggregate of 24 percent, but the runner-up threat country, Pakistan, was way behind at eight percent. China was third at six percent, followed by North Korea, Iran and Israel at five percent each.

The survey of opinions across 65 countries by pollster Win/Gallup International recorded some of the strongest anti-American sentiment, predictably, in countries widely regarded as rivals, led by Russia (where 54 percent of respondents said the U.S. was the greatest threat to peace) and China (49 percent).

But the view that the U.S. poses the greatest threat to peace was also strongly held in some purported U.S. allies – such as NATO partners Greece and Turkey (45 percent each), and Pakistan (44 percent), which is also a top recipient of U.S. aid.

Continues >>
Posted by Nasir Khan at 4:36 pm No comments: