Israel Will Annex 93 % of the Palestinian West Bank

– On Sunday, 29 December, Israel’s Ministerial Committee on Legislation approved a bill to annex the Jordan Valley of Palestine’s occupied West Bank. The bill shall ensure that the region remains within Israeli sovereignty even if an agreement with Palestine is reached under the ongoing, US-facilitated, talks or any other agreement in the future. A closer look reveals that there is nothing new in the proposed bill, and that neither of the two major Palestinian factions are likely to respond by implementing a policy that is consistent with the liberation of Palestine.

The bill has been proposed by Member of Israel’s Parliament (Knesset) Miri Regev and has been supported by eight Ministers from Prime Minister Benjamin Netanyahu’s Likud party, Yisrael Beitenu and Habayit Hayehudi, reports the Israeli news agency y-net. The sponsor of the bill, Miri Regev, is a former Brigadier General of the Israeli Defense Forces (IDF) and a former military spokeswoman.

Continues >>
Posted by Nasir Khan at 7:15 pm No comments:

I worked on the US drone program. The public should know what really goes on 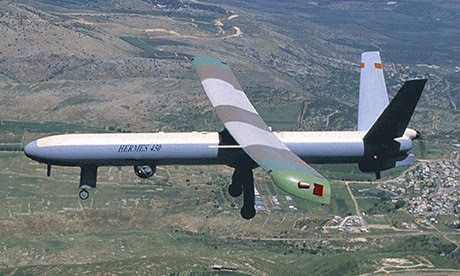 An Elbit Systems Hermes 450 drone. Photograph: AFP/Getty Images
Whenever I read comments by politicians defending the Unmanned Aerial Vehicle Predator and Reaper program – aka drones – I wish I could ask them some questions. I’d start with: “How many women and children have you seen incinerated by a Hellfire missile?” And: “How many men have you seen crawl across a field, trying to make it to the nearest compound for help while bleeding out from severed legs?” Or even more pointedly: “How many soldiers have you seen die on the side of a road in Afghanistan because our ever-so-accurate UAVs [unmanned aerial vehicle] were unable to detect an IED [improvised explosive device] that awaited their convoy?”

Few of these politicians who so brazenly proclaim the benefits of drones have a real clue of what actually goes on. I, on the other hand, have seen these awful sights first hand.

Chomsky: The one state/two state debate is irrelevant as Israel and the US consolidate Greater Israel

Noam Chomsky, Mondoweiss, October 24, 2013
On July 13, former Shin Bet chief Yuval Diskin issued a dire warning to the government of Israel: either it will reach some kind of two-state settlement or there will be a “shift to a nearly inevitable outcome of the one remaining reality — a state ‘from the sea to the river’.” The near inevitable outcome, “one state for two nations,” will pose “an immediate existential threat of the erasure of the identity of Israel as a Jewish and democratic state,” soon with a Palestinian-Arab majority.

On similar grounds, in the latest issue of Britain’s leading journal of international affairs, two prominent Middle East specialists, Clive Jones and Beverly Milton-Edwards, write that “if Israel wishes to be both Jewish and democratic,” it must embrace “the two-state solution.”

It is easy to cite many other examples, but unnecessary, because it is assumed almost universally that there are two options for cis-Jordan: either two states — Palestinian and Jewish-democratic — or one state “from the sea to the river.” Israeli commentators express concern about the “demographic problem”: too many Palestinians in a Jewish state. Many Palestinians and their advocates support the “one state solution,” anticipating a civil rights, anti-Apartheid struggle that will lead to secular democracy. Other analysts also consistently pose the options in similar terms.

Continues >>
Posted by Nasir Khan at 7:34 pm No comments: 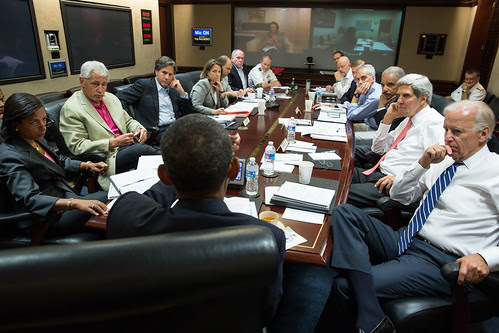 Photo from The White House | (Note: Photos like the one above are released as a substitute for granting photographers from the press access.)

For the first time since the United States began to launch drone attacks, a strike was launched late on Christmas Day in Pakistan. Four people who could not be identified but who were allegedly from Afghanistan were killed.

The Pakistani newspaper, The Express Tribune, reported, “Four suspected militants were killed when a US drone fired missiles at a compound in North Waziristan Agency in the late hours of Wednesday.”

Two missiles were fired at a compound. A local tribesman said he had heard “two huge explosions” in the “outskirts of Miramshah.” Tribesmen left their homes in panic.
“We can still hear the sound of drones hovering in the sky,” he said, adding that the bodies were being pulled out of the compound.

The Pakistan Tribune also reported, “Panic gripped the area following the attack as unmanned aircraft kept flying over the area till wee hours of Thursday morning.” And, “The identity of the deceased couldn’t be ascertained because of their charred bodies.”

Continues >>
Posted by Nasir Khan at 6:11 pm No comments:

There has been yet another violent attack with mass casualties. This was not the act of a lone gunman, or of an armed student rampaging through a school. It was a group of families en route to a wedding that was killed. The town was called Radda—not in Colorado, not in Connecticut, but in Yemen. The weapon was not an easy-to-obtain semiautomatic weapon, but missiles fired from U.S. drones. On Thursday, Dec. 12, 17 people were killed, mostly civilians. The London-based Bureau of Investigative Journalism has consistently tracked U.S. drone attacks, recently releasing a report on the six months following President Barack Obama’s major address on drone warfare before the National Defense University (NDU) last May. In that speech, Obama promised that “before any strike is taken, there must be near-certainty that no civilians will be killed or injured—the highest standard we can set.” The BIJ summarized, “Six months after President Obama laid out U.S. rules for using armed drones, a Bureau analysis shows that covert drone strikes in Yemen and Pakistan have killed more people than in the six months before the speech.” In a nation that abhors the all-too-routine mass killing in our communities, why does our government consistently kill so many innocents abroad?

Continues >>
Posted by Nasir Khan at 9:25 pm No comments:

Posted by Nasir Khan at 5:52 pm No comments: 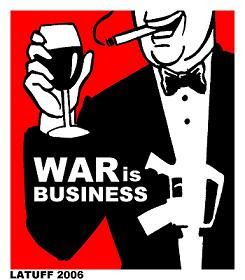 Adam Smith said governments are “instituted for the defense of the rich against the poor.” Wars are waged to make them richer.

Michael Parenti said “the best way to win a Nobel Peace Prize (is) to wage war or support those who wage (it) instead of peace.”

In his book titled “The Face of Imperialism,” he discusses a richly financed military/industrial complex. Peter Phillips and Mickey Huff call it the “military-industrial media complex.”


Doing so has nothing to do with external or internal threats. It’s unrelated to spreading democracy. It isn’t about humanitarian intervention.

Continues >>
Posted by Nasir Khan at 8:18 pm No comments:

The Christmas season celebrates the regal myth of Jesus – his supposedly miraculous birth and royal lineage as a king of kings – but that loses sight of the historical Jesus and his revolutionary message of justice for the poor and powerless, as Rev. Howard Bess reflects.

By the Rev. Howard Bess

The emergence of Jesus as a Jewish prophet of note was something that no contemporary would have predicted. After all, he lived in a world where leaders were determined by the prominence of their birth or by their effective use of violence.
Jesus possessed neither. He came from humble origins and taught nonviolence. Jesus gained a following among the poor as a reputational rabbi, meaning that he lacked a formal education and religious training. He also lived in the small town of Nazareth, nearly 100 miles north of Jerusalem, the area’s primary seat of religious and political power. 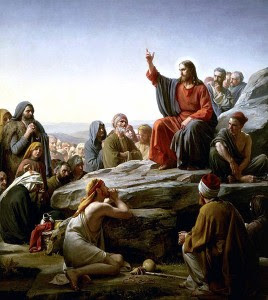 Jesus of Nazareth delivering his Sermon on the Mount as depicted by artist Carl Bloch.

The earliest written record of the life of Jesus was the gospel written by an unknown author called Mark, who says nothing about a miraculous birth or about royal lineage. (The fiction of his miraculous birth to a woman with royal ties was fabricated decades later.)

Posted by Nasir Khan at 5:41 pm No comments:

Slavoj Žižek: If Nelson Mandela really had won, he wouldn’t be seen as a universal hero

Mandela must have died a bitter man. To honour his legacy, we should focus on the unfulfilled promises his leadership gave rise to 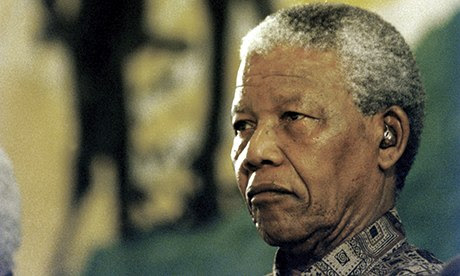 ‘It is all too simple to criticise Mandela for abandoning the socialist perspective after the end of apartheid: did he really have a choice? Was the move towards socialism a real option?’ Photograph: Media24/Gallo Images/Getty Images
In the last two decades of his life, Nelson Mandela was celebrated as a model of how to liberate a country from the colonial yoke without succumbing to the temptation of dictatorial power and anti-capitalist posturing. In short, Mandela was not Robert Mugabe, and South Africa remained a multiparty democracy with a free press and a vibrant economy well-integrated into the global market and immune to hasty socialist experiments. Now, with his death, his stature as a saintly wise man seems confirmed for eternity: there are Hollywood movies about him – he was impersonated by Morgan Freeman, who also, by the way, played the role of God in another film; rock stars and religious leaders, sportsmen and politicians from Bill Clinton to Fidel Castro are all united in his beatification.

Sherwood Ross: 10 Reasons The 9/11 Report is Properly Classified as Fiction

Key points in the government’s version of 9/11 events do not stand up to scientific scrutiny, according to McKnight Professor Emeritus, Dr. Jim Fetzer, a distinguished philosopher of science, who has more than 20 books on scientific reasoning, artificial intelligence and cognitive science. Fetzer formerly taught at the University of Minnesota Duluth and is the founder of Scholars for 9/11 Truth.

Writing in a new book titled, “The Dynamic Duo” (CWG Press), about the events of September 11, 2001, and to me, Fetzer offered multiple reasons as to why The 9/11 Report should be viewed as fantasy:

(1) “The government’s explanation [of the destruction of the Twin Towers] would violate laws of physics and engineering that cannot be transgressed.” Among these is that melting point of structural steel AT 2,800 F., far above the 1,700 F. of burning jet fuel. NIST studied 236 samples of steel from the WTC and found 233 had not been exposed to temperatures above 500 F. and the others not above 1,200 F. “That these towers were brought down by fuel fires is not just improbable but physically impossible.” He added, “Most Americans may not realize that no steel-structure high-rise building has ever collapsed from fire in the history of civil engineering, either before or after 9/11.”