Greetings to all those people around the world who uphold the cause of peace and  work for human rights. The struggle for peace is also a struggle against war and war-mongers. After the collapse of the USSR, the US imperialism had a free hand to unleash genocidal wars in Iraq, Afghanistan and other places. It killed millions of people, made millions homeless, made millions orphans and widows. All peace-loving people condemn these crimes and violations of international law.

Posted by Nasir Khan at 8:49 pm No comments: 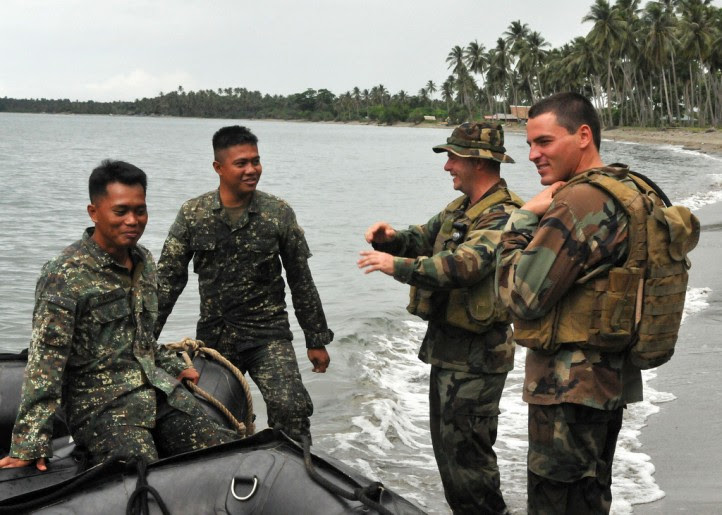 As U.S. President Barack Obama descends on the Philippines, Manila and Washington are rushing to complete negotiations on an Agreement on Enhanced Defense Cooperation (AEDC) between the two countries.

The Philippines’ territorial disputes with China are one major reason for this new agreement. With Washington’s help, Philippine President Benigno Aquino III wants to make the Chinese respect the Philippines’ claims in the Scarborough Shoal, the Spratly Islands, the continental shelf, and its 200-mile exclusive economic zone (EEZ).

The truth of the matter, however, is that the deal will do no such thing.

What the agreement boils down to is that the Philippines will give the United States the right to operate bases in the country—for no rent—without the guarantee of U.S. protection of the country’s island territories.

The case for Aggressive War against George W. Bush and his Administration.

è She alleges that these six defendants planned and waged the Iraq War in violation of international law by waging a “war of aggression,” as defined by the International Military Tribunal at Nuremberg, more than sixty years ago. (The current complaint can be found here).

At the Nuremberg Trials, American chief prosecutor and associate justice of the US Supreme Court Robert H. Jackson focused his prosecution on the planning and execution of the various wars committed by the Third Reich. Jackson aimed to show that German leaders committed “crimes against peace,” and specifically, that they “planned, prepared, initiated wars of aggression, which were also wars in violation of international treaties, agreements, or assurances.”

During the last five centuries European colonisation of the Americas, the New World, started. Mass manipulation was at work right from the early days of the conquistadores. The local populations were dehumanised, many were wiped out and the rest had a tragic fate waiting for them as isolated communities in some forlorn corners of this continent which once was theirs. First Nations, the original inhabitants were seen as wild and primitive. Even now the same attitudes prevail among the descendants of the European settlers.

The settlers needed work force to make the land habitable according to their wishes. They enslaved African people to work for them. These slaves were not given even the status of primitive human beings; they were regarded subhuman.

The same attitudes were infused by the colonial rulers when they took over Asia, Africa and Australia. Their administrators treated the ‘native’ populations as inferior and the subjugated people of these continents believed in their inferiority and cultural backwardness. Now, even after the end of the direct colonial rule in Asia and Africa in the twentieth century, the people of these continents have not broken the chains of mental slavery. They look up to their old colonial masters for guidance and help. They see the West as the holy direction from where only light and goodwill spreads. These days the epicentre of that light is Washington D.C., the capital of the United States of America.
Posted by Nasir Khan at 7:12 pm No comments: