The Egyptian army’s mask has slipped

Those in control have draped themselves in the revolutionary flag – but trials by military tribunals show how phony this is
Austin Mackell, The Guardian, June 22, 2011 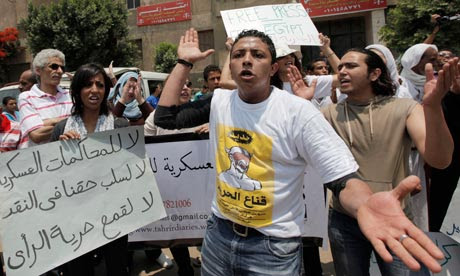 Egyptian activists chant slogans and carry banners that read in Arabic ‘No to military courts, no to confiscating our freedom of speech’ during a protest in front of the military prosecutor’s office. Photograph: Nasser Nasser/AP
The growing practice of sending Egyptian civilians for trial by military tribunals is one sign that the armed forces council now ruling the country is not serving the goals of the revolution.

Since 1962, when a law passed by President Nasser allowed civilians to be put before military tribunals, such trials have been used to convict political enemies of the regime – often on evidence too flimsy for civilian courts.

Following the revolution earlier this year, many hoped that such trials would cease. But the supreme council of the armed forces (Scaf), which assumed power after the fall of President Mubarak, has not only continued resorting to military tribunals but has been using them more and more. Now, rather than communists or Islamist groups, it is democratic activists, and indeed the population at large that have become the targets.