Why the Pentagon Papers matter now

While we go on waging unwinnable wars on false premises, the Pentagon papers tell us we must not wait 40 years for the truth 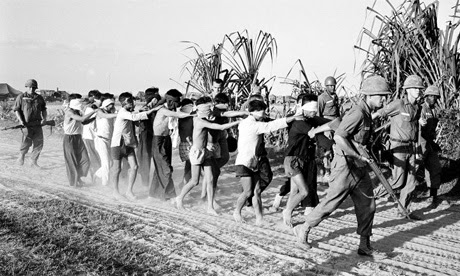 Viet Cong guerrilla suspects led by US infantrymen to an interrogation point near Long Thanh, 40 miles southwest of Saigon, during the Vietnam war on 1 February 1966.
Reflecting on the release of the Pentagon Papers, Daniel Ellsberg bitterly regrets that he did not release sooner contemporaneous evidence in his possession that contradicted the official version of the 1964 Tonkin Gulf incident, which – just as with Iraq’s nonexistent WMD in 2003 – enabled the presidential executive to gain congressional approval for escalating US military involvement in Vietnam. Photograph: AP Photo/Henri Huet
The declassification and online release Monday of the full original version of the Pentagon Papers – the 7,000-page top secret Pentagon study of US decision-making in Vietnam 1945-67 – comes 40 years after I gave it to 19 newspapers and to Senator Mike Gravel (minus volumes on negotiations, which I had given only to the Senate foreign relations committee). Gravel entered what I had given him in the congressional record and later published nearly all of it with Beacon Press. Together with the newspaper coverage and a government printing office (GPO) edition that was heavily redacted but overlapped the Senator Gravel edition, most of the material has been available to the public and scholars since 1971. (The negotiation volumes were declassified some years ago; the Senate, if not the Pentagon, should have released them no later than the end of the war in 1975.)