Foreign workers in Saudi Arabia send £17bn to families back home annually. But for some, the cost in physical and mental abuse is too high, writes Jason Burke
Jason Burke, The Guardian, June 25, 2011 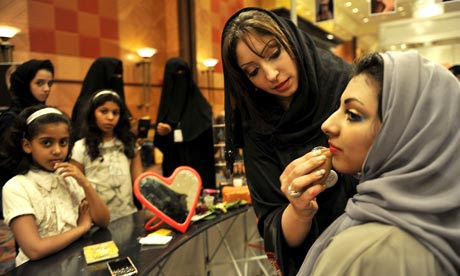 A Saudi woman applies makeup to a woman at a cosmetics exhibition in Jeddah. Photograph: Amer Hilabi/AFP/Getty Images
Shortly after dawn, as the sun rises over the hills behind the city, tens of thousands of women will wake in the Saudi Arabian port of Jeddah and go to work. Maybe 14 or 16 hours later, their day will be over.

They are maids, almost all from the Philippines or Indonesia, working for £100-£200 a month. There are more than 500,000 of them in Saudi Arabia, among nearly nine million foreign workers who sweep roads, clean offices, staff coffee shops, drive the cars that women are banned from driving and provide the manpower on the vast construction projects.

The story of the maids rarely receives attention, except when a new shocking incident reveals once again the problems many of them face. . . .