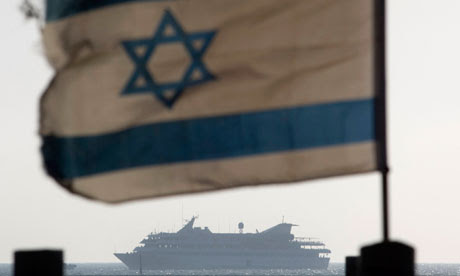 The Mavi Marmara ship, above, the lead boat of a flotilla headed to the Gaza Strip was stormed by Israeli naval commandos last year. Photograph: Ariel Schalit/AP
Israel has stepped up its campaign to stop a flotilla of ships breaching its blockade of Gaza by accusing some of the passengers of intending to harm Israeli soldiers if they board the ships.

An Israeli government official said intelligence agents had discovered that extremists aimed to infiltrate the peace activists travelling on the 10-ship flotilla. “On the flotilla, there’s an unofficial division of labour. There are activists, writers and politicians who say that they are not aware of anyone with bad motives. We believe them but the people that we are concerned about are avoiding the television cameras like the plague.