Five months before invasion, pair agreed to go ahead if weapons breach was revealed, according to newly released letter 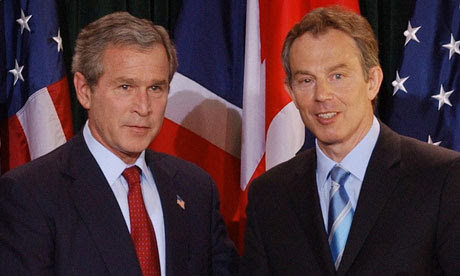 George Bush and Tony Blair in April 2003. A letter shows they had agreed five months before to invade Iraq without a second UN resolution. Photograph: Stefan Rousseau/PA
Britain and the US were planning to take action against Saddam Hussein without a second UN resolution five months before the invasion of Iraq, a newly released letter from Tony Blair‘s office shows.

A letter from Blair’s private secretary reveals that “we and the US would take action” without a new resolution by the UN security council if UN weapons inspectors showed Saddam had clearly breached an earlier resolution. In that case, he “would not have a second chance”.

That was the only way Britain could persuade the Bush administration to agree to a role for the UN and continuing work by UN weapons inspectors, the letter says.