The civilian victims of the CIA’s drone war 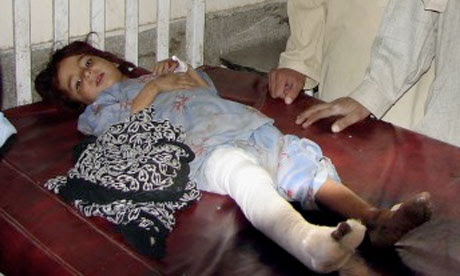 Sameeda Gul, 6, who was injured in a drone strike in Pakistan in 2009. Photograph: Getty Images

I would not deny that the pilotless plane, flying bomb, or whatever its correct name may be, is an exceptionally unpleasant thing, because, unlike most other projectiles, it gives you time to think. What is your first reaction when you hear that droning, zooming noise? Inevitably, it is a hope that the noise won’t stop. You want to hear the bomb pass safely overhead and die away into the distance …

George Orwell wrote of V2 attacks on London in 1944. Yet, there are many more in Britain who identify with that voice, speaking 67 years ago, than with events that are a regular reality in Pakistan today.

This week, a new report from the Bureau of Investigative Journalism gives us the best picture yet of the impact of the CIA‘s drone war in Pakistan. The CIA claims that there has been not one “non-combatant” killed in the past year. This claim always seemed to be biased advocacy rather than honest fact. Indeed, the Guardian recently published some of the pictures we have obtained of the aftermath of drone strikes. There were photos of a child called Naeem Ullah killed in Datta Khel and two kids in Piranho, both within the timeframe of the CIA’s dubious declaration.