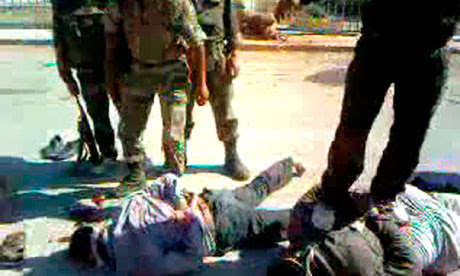 An image from a YouTube video apparently showing Syrian forces beating up detainees near Homs. Photograph: AFP/Getty Images
At least 88 people, including 10 children, have died in detention in Syria since the uprising against the regime began in March in what amounts to “systematic persecution on a vast scale”, according to Amnesty International.

The majority of victims were tortured or ill-treated, with injuries ranging from beatings, burns and blunt-force traumas to whipping marks, electrocution, slashes and mutilated genitals.

Amnesty documented the names, dates and places of arrest of victims, while independent forensic pathologists have established possible causes of death in some cases by examining film of the bodies.

Amnesty’s report was released as at least seven people were killed when thousands protested outside mosques following prayers to mark the end of the holy month of Ramadan.