by Marjorie Cohn, CommonDreams.com, Aug, 10, 2011
Today marks the 50th anniversary of the start of the chemical warfare program in Vietnam without sufficient remedial action by the U.S. government. One of the most shameful legacies of the Vietnam War, Agent Orange continues to poison Vietnam and the people exposed to the chemicals, as well as their offspring. H.R. 2634, the Victims of Agent Orange Relief Act of 2011, which California Congressman Bob Filner just introduced in the House, would provide crucial assistance for social and health services to Vietnamese, Vietnamese-American, and U.S. victims of Agent Orange. 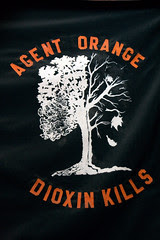 From 1961 to 1971, approximately 19 million gallons of herbicides, primarily Agent Orange, were sprayed over the southern region of Vietnam. Much of it was contaminated with dioxin, a deadly chemical. Dioxin causes various forms of cancers, reproductive illnesses, immune deficiencies, endocrine deficiencies, nervous system damage, and physical and developmental disabilities.