What Really Happened in the Bin Laden Raid? 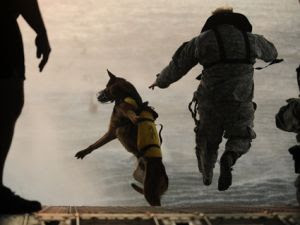 A US Army soldier and his dog jump off a helicopter ramp during water training in March 2011. Manuel J. Martinez/U.S. Air Force Handout
Details of the story don’t add up. Footage of the raid either exists or doesn’t. The tale of that night in Abbottabad keeps getting more muddled.
You don’t have to be a conspiracy theorist to be still scratching your head about the end of Osama bin Laden. Between the Obama administration and major media reports, there have been multiple divergent accounts of the Navy SEALs’ mission in Abbottabad, Pakistan, with the story seeming to be colored by politics, sensationalism, and outright fantasy. In some respects that’s unsurprising for one of the most important and highly classified military missions in modern memory‚ the outcome of which, many would argue, is all that really matters. But precisely because of its importance, it is worth considering how the tales have been told, and where history begins to bleed into mythology.