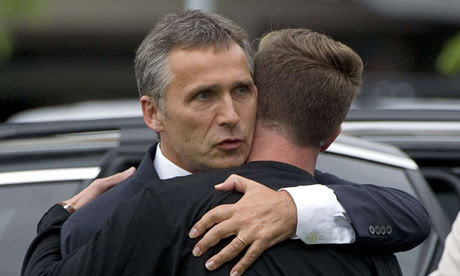 Norwegian prime minister Jens Stoltenberg embraces a survivor of the Utoeya island shooting. Photograph: Odd Andersen/AFP/Getty Images
Like every other citizen of Oslo, I have walked in the streets and buildings that have been blown away. I have even spent time on the island where young political activists were massacred. I share the fear and pain of my country. But the question is always why, and this violence was not blind.

The terror of Norway has not come from Islamic extremists. Nor has it come from the far left, even though both these groups have been accused time after time of being the inner threat to our “way of living”. Up to and including the terrifying hours in the afternoon of 22 July, the little terror my country has experienced has come from the far right.