Predator Drones and the International Mafia 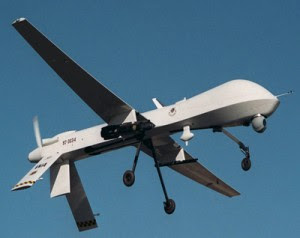 Arbitrary extrajudicial executions, carried out at the press of a button from CIA locations in California, with no transparency or accountability, are undoubtedly a violation of international law possibly constituting war crimes. And yet in 2009 alone, American predator drone attacks killed a reported 708 people in Pakistan —a clear violation of the norms of international sovereignty, especially given the fact that the Pakistani government has spoken out against them (at least in public).

According to the Brooking Institution more than 90 percent of those killed have been civilians. Noor Behram, who has been documenting the aftermath of drone strikes in Waziristan on-site  for the last three years concurs that “for every 10 to 15 people killed, maybe they get one militant”.