The fight to rescue the Arab spring 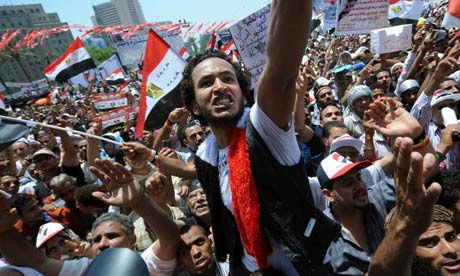 Egyptian protesters wave their national flag and shout slogans in Cairo’s Tahrir Square. Photograph: Mohamed Hossam/AFP/Getty Images
The historic revolutions that have rippled through the Arab world this year were in danger of eclipse on Friday night as protesters returned to the streets to profess their disgust at how the movement is being stymied by regimes old and new.

Six months after the Arab spring claimed its first dictator, the main squares of Cairo and Tunis were again alive with protest, teargas and fury at the resistance to change shown by interim authorities. In Syria activists said at least 19 people had been killed in the latest crackdown against protests that have convulsed the country for more than four months. At least seven people were killed in Yemen amid a political limbo that appears no closer to resolution. And in Jordan a heavy security presence policed pro- and anti-reform demonstrations which turned violent.