One man in Waziristan is documenting casualties – and says destruction has been radicalising locals
Saeed Shah in Islamabad and Peter Beaumont, Guardian, July 17, 2011 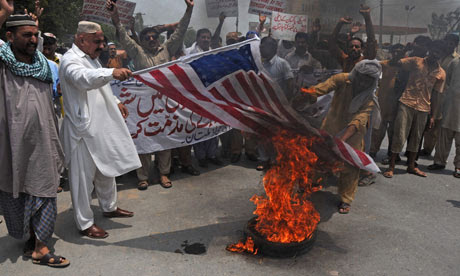 US drone strikes in Pakistan are condemned by protesters at a rally in Waziristan along the Afghanistan border. Photograph: Khalid Tanveer/AP
For the past three years, Noor Behram has hurried to the site of drone strikes in his native Waziristan. His purpose: to photograph and document the impact of missiles controlled by a joystick thousands of miles away, on US air force bases in Nevada and elsewhere. The drones are America’s only weapon for hunting al-Qaida and the Taliban in what is supposed to be the most dangerous place in the world.

Sometimes arriving on the scene just minutes after the explosion, he first has to put his camera aside and start digging through the debris to see if there are any survivors. It’s dangerous, unpleasant work. The drones frequently hit the same place again, a few minutes after the first strike, so looking for the injured is risky. . . .