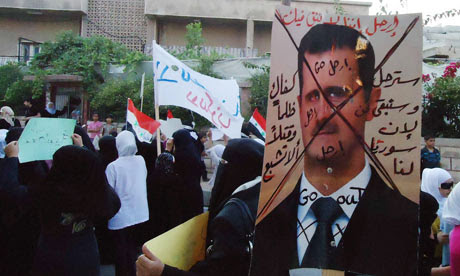 Syrian anti-regime protesters carry a picture of President Assad that reads, “Leave. We don’t trust you. You will leave and we will stay because Syria is ours. Enough of injustice and killing,” during a rally in Damascus. Photograph: AP
Hundreds of thousands of Syrians turned out for anti-regime demonstrations across the country on Friday with at least 11 people reported killed by security forces and tensions mounting in the runup to the Ramadan holiday.

Casualty figures – collated by two Syrian human rights groups – were down on previous weeks but the numbers of demonstrators appeared to be some of the largest yet seen in the four-month uprising.