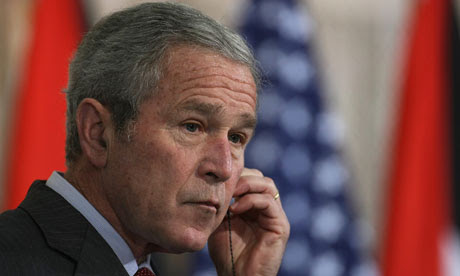 George W Bush, whose administration is accused by Human Rights Watch of authorizing use of torture. Photograph: Christopher Furlong/Getty Images
A US human rights group has called on foreign governments to prosecute George W Bush and some of his senior officials for war crimes if the Obama administration fails to investigate a growing body of evidence against the former president over the use of torture.

The New York-based Human Rights Watch said in a report released on Tuesday that the US authorities are legally obliged to investigate the top echelons of the Bush administration over crimes such as torture, abduction and other mistreatment of prisoners. It says that the former administration’s legal team was part of the conspiracy in preparing opinions authorising abuses that they knew to have no standing in US or international law.

Rule of Law applies to all no distinction between rich and poor, in the eyes of God as an equal then whoever the guilty should be punished according to his deeds