The Syrian city of Hama, the scene of a bloody crackdown by President Assad’s army, has a long history of standing up to the brutal Ba’athist regime
Nour Ali, The Guardian, August 1, 2011 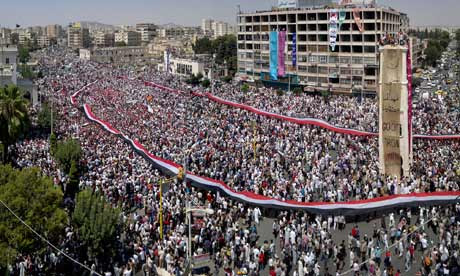 Protesters in al-Assy Square in Hama on 22 July 2011, with a giant national flag. The army sent in tanks nine days later. Photograph: HO/AP
It’s early July in Hama. Among the rows of windswept trees and sandy housing, makeshift checkpoints of burned-out cars and dustbins protect its neighbourhoods. The atmosphere is tense as residents wonder what fate awaits the city at the heart of Syria‘s five-month-old standoff between protesters and the regime.

The answer came on Sunday. It is difficult to report from Syria as the government does not allow journalists to work freely in the country. But according to residents and activists, the regime decided it had had enough. Without provocation, tanks that had been stationed on the city’s outskirts for weeks previously approached Hama from four directions followed by infantry and security forces. . . .